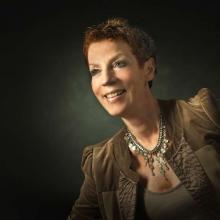 She studied English and after being a writer/editor, Angélique de Graaff owned a sales representative company for publishing houses. Later on she became a teacher in a special school for teenagers with learning and behavioral challenges and started studying NLP, RET, Gestalt Therapy, Leadership, coaching, training and Nonviolent Communication.

As soon as she successfully passed the training and NLP training courses she started her own training school Cherub NLP training & coaching (www.cherub.nl).

A few years later she founded The Classwhisperer (www.theclasswhisperer.com) as a company to support teachers. She guides them into being the best teacher they can be.

By then - as a global ambassador for the Dutch NLP Association - she contacted NLP-co-creator John Grinder intending to hear NLP ‘straight from the horse’s mouth’. She became an NLP New Code Trainer and understood the importance of working with the people who ‘invented’ NLP, so she went and studied for weeks with Richard Bandler to become an NLP trainer for the Society of NLP.

Only a few years ago a third co-creator came out of the woods: Frank Pucelik. John Grinder mentioned him in his book ‘Whispering in the Wind’ and with the book ‘the Origins of NLP’ Frank Pucelik is given his rightful place in the NLP Community.

So Angélique de Graaff went to the Ukraine and Russia to attend Pucelik’s NLP trainings and became his NLP trainer too. She regularly invites Frank Pucelik to Holland, to help out with a project that she started - inspired on Pucelik Projects in Ukraine. His approach of Post Traumatic Stress Disorder with for instance military veterans is extremely successful and Angélique is having him teach that for her Foundation Meta Group Holland (www.metagroupholland.com) as well.

To get even more information and NLP education she attended master classes with the 2nd generation NLP-developers like Connirae Andreas and Robert Dilts. After studying with Robert Dilts in Santa Cruz, the University of California (birth place of NLP) she became Dilts’ Master Trainer/Master Entrepreneur.

Angélique de Graaf is invited to train NLP all over the world. She’s been training in Pakistan, Germany, Spain, United States, England and Italy to mention a few. Sharing her true passion with everyone that’s open for her enthusiasm.

I'm on the road to getting the life I want

Testimonials Get the Life You Want - May 2018 from Barry