How An Olympic Gold Winner Became Determined To Train 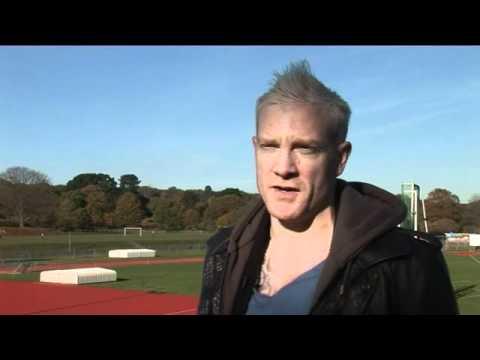 When Dr Richard Bandler interviewed Gold Medallist Iwan Thomas, he wanted to know how he stayed disciplined to keep on training, even when it hurt.

His answer was inspirational!

This transcript, from the video series The Secrets of Success [LINK TO PRODUCT], reveals Thomas's motivation strategy.

RB: One of the things I’ve discovered about many successful people is they’re hard to satisfy, that’s part of what propels them forward.  But for you to consider entering these races and competing you had to be able to have something which propelled you forward, you had to think of this as the thing to do.  I mean, did you see yourself as a winner of races?

RB           When you set a goal of winning this BMX race did you actually see yourself coming in ahead of other people in your mind?

RB           In other words, you have a stopwatch, an imaginary stopwatch you can check against, or –

RB           So you switched to the schools and you started running, and you said you became more serious about it.  So what changed at that point?

IT             Well I knew I was good at athletics but I’d never concentrated on it because I was doing all the other sports.  Everyone told me I could be good at it and I think it was a case of maybe I was a bit worried, fear of failure really.  Everyone said, ‘Oh you’re so talented, you could be very good,’ and I suppose I didn’t wanna try in case I was a let-down, but in this new school I did try, I did five events on school sports day and I won all five events and I broke every single school record.  And, luckily for me, I had a really keen PE teacher who literally gave me a clip round the head and said ... I remember it clearly, he said, ‘What are you doing?’  He said, ‘The last time I saw talent like that they went on to get an Olympic medal.’  And was like, ‘Oh whatever, sir.  Don’t be stupid, I’m a sixteen year old kid.’  And he made me go to athletics club and within a month I ran for Great Britain.

RB           Once he told you that he’s seen talent like that win the Olympics, did you start to make a movie of winning the Olympics?

IT             No, I still didn’t really believe it and it wasn’t until ... well that year I went to the World Junior Championships and I didn’t belong to an athletics club, I didn’t have a coach, and I had, like, one pair of trainers, and it was all very, very happened so suddenly for me.  It was literally, as I said, I did the school sports day, the week after I did the County Championships, I won that, then I went to something called the English Schools, came second.  And from there I had an international race and it all happened so quickly, and it wasn’t really probably ‘til the summer that I went to uni that I started to mix with other athletes and train with some who were older than me and I was beating them in training and I thought, ‘Maybe the teacher was right, maybe I could do well.’

IT             Well when I was at uni I went to the Commonwealth Games off very little training, if I’m honest, I was a typical student, going out too much and telling my coach I was training, like, three times a week but I was training once a week.  I ran a time of 45.9 which I didn’t make the final but I went away and I actually gave myself a stiff talking to, ‘cause I thought, ‘If I can honestly run that kind of time off very little training what could I actually really do if I pushed it?’

RB           - you had this, again, inspirational voice that looked at something which could be called ‘not doing well’ instead said, you know, ‘Well I didn’t really train and really if I applied myself how much better could I do?’

IT             Hmm.  And that’s what happened.  I finished my degree, I moved to Southampton, I worked in a clothes shop, in Next, part-time in the mornings, folding clothes and selling clothes, and in the evenings I trained and I just said to myself ... ‘cause this was long before we had Government Lottery funding, this was my mum and dad saying, ‘Look, we’ll financially help you for a year, we’ll pay your rent, let’s see how good you could be.’  And through respect to my parents, I just trained my heart out every night to the point that maybe I was sick most training sessions, just to see how good I could be.  And that year I just had a breakthrough.

RB           And did you keep thinking about winning when you were training?

IT             I just remember words that people had said to me on the way, like a guy called Dan I used to train with.  The best four hundred metre hundred, my event, before me, Roger Black used to train with my coach before, and this guy Dan said, ‘Look, you’ve run 45:9 off nothing, if you train within a couple of years you could be the British record holder,’ and I was, like, ‘Oh do you really think so?’  And, once again, that did happen but it was hard to imagine it ‘cause I was a long way off in terms of time from running what I had run.

IT             I remember little things people have said to me all along in my career, and when training hurts and when it’s cold and it’s freezing cold in Southampton and it’s snowing and, you know, it’s not nice to be out there training, I’d remember all these things people had said to me, use that as my fuel to get up and train.

Find out more about all our upcoming seminars. EXTRA discounts available when you book with friends. [LINK TO ALL SEMINARS]

You can download free online NLP courses and reports here. [LINK TO 'NLP opportunities that will cost you nothing' Blog Page]

Kalpna - Get the Life you Want