GET A SECOND LIFE! - NLP in the Virtual World - By Gina Pickersgill

Want to get a life? How about a Second Life? Gina Pickersgill explains the fascinating Second Life virtual project that applies NLP principles at its core.

What is Second Life?

Second Life is a three-dimensional virtual online community created entirely by its residents. Residents sign up for a free account by creating a customized avatar that represents their desired virtual identity (Sound familiar?). The avatar moves around in Second Life's stunning graphic interface using the mouse control and keyboard buttons. Modes of travelling include walking, sitting, running, and flying.  There are also many additional customised animations that can be obtained inworld to suit personal preferences such as dances, couple animations, greetings and more. Developed spaces in this virtual environment represent the imagination of talented residents who have used the in world building tools to create the structures and add sympathetic sounds such as wind in the swaying trees, babbling brooks, music and video. Teaching, learning and social networking are possible using the voice, built-in chat and private instant messaging (IM) Residents can buy, lease or rent their own land on which to start businesses, role-play with other residents, create virtual goods which can be sold on the XstreetSL Market place or just hang out with friends. For the uninitiated it's a whole new world of experience and from an NLP perpective is a great way to explore the creative ability of the human mind.

The first thing you notice when you first log in to Second Life is the awkwardness with which you move around. Like any new learning situation, diving into the unknown can be disconcerting at best and disappointing at worst. But those that have the fortitude and  stamina to resolve their learning issues will discover an amazing opportunity to set foot in a world where nigh-on anything is possible and where people are just as real in Second Life as they are in real life. The world is catching on to new ways of communicating and if anybody knows how to communicate in new ways, it’s the NLP practitioner. So what is all the fuss about? And why is NLP so applicable to a virtual environment?

Well, the first thing is its ability to contact another person on an energetic level. Not many people are able to focus on the systems that allow you to find where a person is coming from energetically. This is one way of tuning in to them physically without having any other distractions that might cloud your judgment. So now that we have established that you can be with people on an energetic level, let’s look at the ways in which we can access the parts of their neurology that enable them to change they way they think. 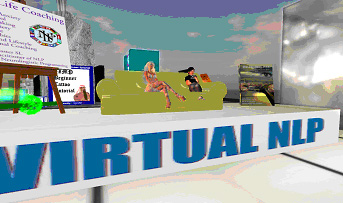 By its very nature, Second Life is a very visual modality and allows those that would normally have difficulty in creating mental images to create images as represented on the screen in front of them. They are able to view the sights with impunity, whilst literally taking steps to focus on what they are able to view on the inside of it. When moving around in SL, an avatar has to move their body through the scenes (mental images) that either they or others have created. This gives us two distinct advantages. The first is that you can both see what is in front of you and the second is that you don’t have to waste time asking if they are making mental pictures, as this is a given in terms of ‘virtuality’.

So whilst you are focusing on the image before you, the practitioner can guide their client through a process of finding internal resources whilst setting up the states needed for their initiation, using language, voice tone and linguistic structures designed to enhance the communication. As with any NLP intervention, the student needs to be ready and willing to go through the steps and have an attitude of possibility to match that of the practitioner or more. 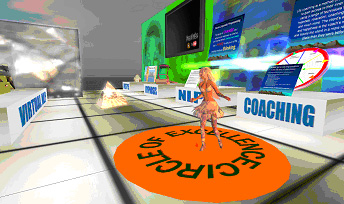 Second Life makes this easy to do because of the medium and nature of focus required for its participation in. Its hypnotic structure allows the student to focus on a specific object within the environment and still be aware of the interaction between themselves and the NLP coach. Why is this relevant?

Well, we all want to show our clients how to focus more specifically  on what they want, and this is a way of training their brains to neurologically develop the skill of focusing on something they want to imagine. Cool eh?

Great! We are getting the idea that SL is a medium in which transformation is possible, doable and applicable to the ways in which NLP operates.

Finding enjoyable places in SL is like finding a resource state inside of yourself.

So where now? The medium, in which you find yourself living a second life, is one where you can choose to go anywhere you please. There are a myriad of types of places and venues that evoke certain feelings, sensations, thoughts and ideas. The trick is to find which place brings you the most satisfaction and then access them by way of a teleport device that comes as standard with the program. Wouldn’t it be cool if you could teleport to states of bliss, relaxation and sheer enjoyment? The idea that you go to places in SL is the same idea that NLP uses to help clients access resource states in their mind. The fantastic fact of the matter in this case is that you, the practitioner, get to go with them, and more often than not; you get to go first!!! Wow! What a thought! Why is this helpful? 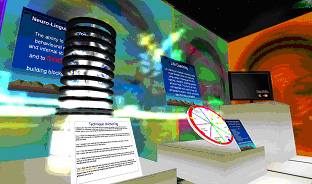 Anchoring a resource state via an SL teleportation tool

Well instead of imagining what is going on inside the client’s mind, you can see for yourself what they are seeing and take them one step further into the states of being that gain their attention and desire for changing what they don’t need and developing the ones they do. Time is of the essence and this just speeds up the process of learning via its ability to engage the client more deeply into the virtual experience both in their minds eye and in SL. The process of learning to change your mentality can have an effect on the way you perceive the world around you. So why wait until you are lost to find yourself again? Processing your thoughts in a way that is mutually viable for your health and well-being are the manner in which you get something more than you previously thought possible. The beauty of this is that you don’t need to be in the vicinity of the masses to do this. It takes just one application of a few techniques to guide a person on the right track, so that they can focus on what they want and find ways of being creative in manifesting the life they have wanted for so long, but didn’t quite know how until now. Change is formidable to most people, but SL makes it fun, doable and is the norm for those that stick with it, make an effort and get the idea.

Gina Pickersgill has pioneered the delivery of NLP and Coaching in Second Life where she works with you in ways that are not possible in 'real life'. The visual graphics and building abilities make it an  unprecedented environment in which to effect very powerful change.  Her SL avatar is Nina Lancaster.

Visit  www.virtuallyspiritualsoulutions.com to learn how to get a Second Life.

Learn how to apply NLP to your everday life by training with Richard Bandler, co-creator of NLP, and the world's finest NLP Trainer.

Lars Erik - Get the Life you Want

Testimonials Get the Life You Want - Oct 2019 from Paul