A Unique Event: Face to Face With Richard Bandler - by NLP Life

Home / Blog / A Unique Event: Face t ...
In a unique event held on 11th May 2010 at the Copthorne Tara Hotel, Richard Bandler revealed a different side to himself, reports NLP LIFE. 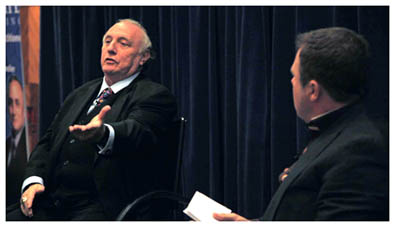 Richard Bandler on stage with Paul Ross, Face to Face with some unexpected questions.
In a conference room in Kensington, Richard Bandler delivered a spellbinding evening of laughter and of serious discussion, by giving his audience the opportunity to ask him any question, on any subject they wanted to.  The questions ranged from precise details about NLP to the "big questions" about life itself - from the state of the economy, through how dogs teach people to be better hypnotists, to the real possibility of an afterlife, there was a fascinating and eclectic mix of questions. Richard had seen none of them beforehand - and he answered them all with characteristic humour and insight.
Hosted by BBC Radio London's Paul Ross, the evening saw a hundred people turn up to ask questions or just be entertained by the answers. 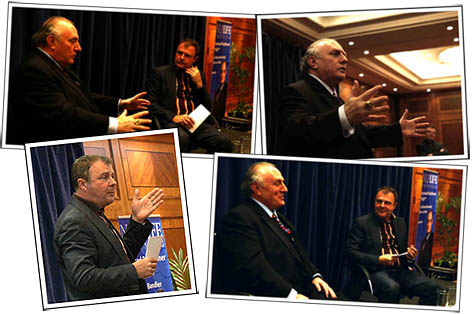 Paul Ross also threw questions into the mix, entertaining the audience with his witty repartee, and keeping proceedings moving along at a brisk and lively pace.

Sprinkled In the audience were well-known actors, writers and football managers, as well as many people with a professional interest in NLP.

Actor Mark Wingett, best known for his role in ITV's The Bill commented: "This was one and a half hours of pure entertainment, and was pretty informative at the same time.  It went by in no time at all."

Meanwhile, Paul Ross was really equally impressed by Richard's presence:  "Richard shed a lot of light on different areas, and he's got a wide area of knowledge.  It was a great night!"

Members of the audience were spellbound by Dr Bandler's delivery.
With some surprising discussions about the nature of life, the uses of NLP and the nature of happiness among other things, the evening revealed many more facets of Richard Bandler, giving a fascinating insight into the life and thoughts of this amazing man.
The footage from the evening will be used for an upcoming DVD to be released in the autumn along with further promotional material.
Keep your eyes open for more information about the upcoming DVD "Face to Face With Richard Bandler" in the coming months.

The seminar was amazing