UP Daily Reminders for a more upbeat life - by Nita Saini

Home / Blog / UP Daily Reminders for ...
Nita Saini talks about her latest book, "UP", the long years of depression that she was forced to face, and how NLP and right mindfulness gave her the power to come off the Seroxat, for good. 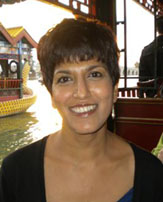 Nita Saini
Author of "UP"

My reaction to spilling a tub of yoghurt on a clean kitchen floor was the moment I knew I had a serious problem, the straw that broke the camels back. I collapsed into a flood of tears that just wouldn’t stop, intermittently shouting at my 2 young girls when there were gaps in the crying. Something I’m not very proud of.

As a single mum with two girls aged five and three at the time, life was hard. I couldn’t take it anymore.

When my doctor asked whether I was sleeping badly, had no energy or any desire to be active, I denied everything.  I was so worried my children would be taken away from me.  “They” would decide that I wasn’t capable of looking after them.

The torment of living in that black, windowless room of my mind, was just too much for me to bear any more. The next day after only two hours sleep and more suicidal thoughts I went back to the doctor. I had to tell the truth and then began on 20mg of Seroxat which increased to 40mg within a couple of months.

When my GP handed me my first prescription, she said that taking antidepressants was not the long-term answer and that I would also need therapy. I didn’t feel ready for that until a year later. I then went for counselling for two years, one session a week. There’s a great phrase by the great Henry Ford ‘if you always do what you’ve always done, you’ll always get what you’ve always got. Why it took me 2 years in decide that this therapy wasn’t working, I will never know.

This therapy was so problem-focussed. I was constantly encouraged to talk and talk about what was wrong with my life and the possible reasons why things were not working out. I just wanted a SOLUTION.

So I embarked on alternative natural therapies such as exercise, reflexology, etc. etc. These didn’t work either. I was at the end of my tether and honestly didn’t know where to turn. If it wasn’t for my children relying on me, I would have ended it all there and then.

It was only later that I came to realise that my thoughts, habits and behaviours were not supporting me.

...I remember having far too many thoughts spinning around in my head...

For so many years I had been consumed with feelings of hopelessness and helplessness, anger, guilt and even hatred towards myself and others. I was proud of being one of life’s victims. Bad things happened to me. Nothing was ever my fault. I was not in charge of my emotions. I was yet to learn that only I had the power to change them.

I remember having far too many thoughts spinning around in my head. I have since learned that this is a common trait amongst many downbeat people.

I therefore decided to take full responsibility for my own recovery. Born out of intense frustration, I began my own quest to find out how I could help myself safely and permanently.


There were two major turning points for me

1 Making the fundamental decision to make being upbeat a daily life priority and
2 discovering precisely what to do on a daily basis to support my unwavering desire to become upbeat.

I proactively pursued techniques and strategies that were solution-focussed. These helped me to re-programme my mind and to naturally help me increase my own serotonin levels (the happy hormone!).

...NLP is  all about using our brains in the best way possible so that we get the results we want in all areas of our life...

Initially I went to see  Steve Wichett a highly skilled NLP practitioner who helped me become more solution focussed and less depressed and downbeat.  I can still remember his first question which was ‘What do you want, what do you really, really want’?

Later Steve encouraged me to attend a course in NLP run by NLP Life Training. Richard Bandler was the trainer, together with Paul McKenna and Michael Neill.  Richard Bandler is the co-founder of NLP (Neuro Linguistic Programming).

NLP is  all about using our brains in the best way possible so that we get the results we want in all areas of our life – relationships, work, health, business, finances... the list is endless. Since recovering from depression, and I did, I have since used NLP in these other areas too.

What Richard Bandler does, changed my life and he can change your’s too. You too can find de-light at the end of the tunnel. This stuff really works, I’d tried everything and up until then nothing had worked. NLP works to the core so that deep routed changes can happen that become permanent life enhancing fixtures.

Using these techniques and strategies for re-programming my mind, I was surprised to discover that I quickly and easily started to be more upbeat.

Within five months, and with the full knowledge and support of my  GP, I was totally off the antidepressants and have not looked back. This was after experiencing depression for about 7 years.

With the right help, people can and do recover. After all the pain, anguish and trauma I went through in my own recovery, I so wanted to help others recover by sharing what I learned. Which is where my book UP was born.

NLP techniques and strategies like the ideas in “Up” are simple and easy-to-implement as part of a daily routine.  It’s a pocket book because I found that when I was recovering, I would carry bits of paper around in my handbag and pockets to remind myself how to think/do and behave in ways that were more supportive to me. By regularly repeating them, helped me enormously to embed these permanent upbeat habits. I know that the short term effort has had a massive long term positive, life-improving effect.

In sharing my story with you, I want to say to you there is hope, don’t ever give up. You already have all the power within you to make positive changes to you and your life.

For more information about Nita Saini and “Up: Daily Reminders for a More Upbeat Life” visit www.NitaSaini.com

The past 9 days have been life changing

The NLP application was excellent...